Project Body Smart | Can you lose weight by turning down the heater?
8364
post-template-default,single,single-post,postid-8364,single-format-standard,ajax_leftright,page_not_loaded,,no_delay

Can you lose weight by turning down the heater? 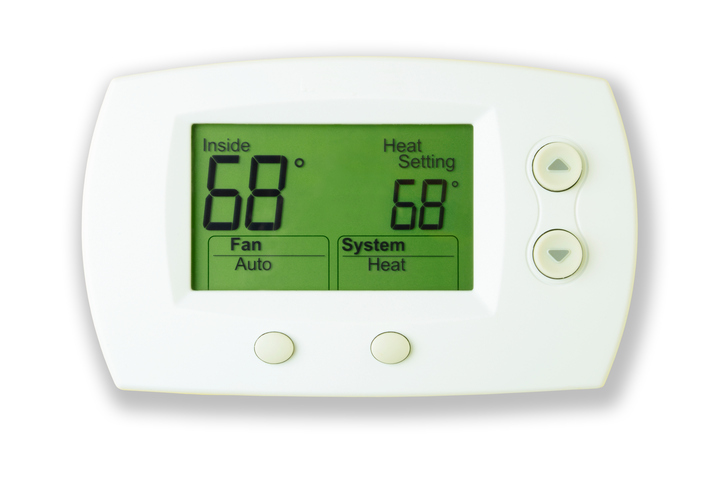 Believe it or not, there’s actually a simple, non-scammy way to “hack” your metabolism. And not only is it free, but it takes around two seconds to do … just walk over to your thermostat and tap a button.

Humans are warm-blooded. You are human. Hence, you need to keep your blood warm to stay alive.

And what keeps your blood and other tissues warm? Burning fuel!

To keep your tissues warm during cold exposure, you need to burn even more fuel — more calories — than normal. But how much more: a negligible amount, or enough to impact weight loss? How low do you have to set your thermostat, and will you get uncomfortably cold? And what exactly goes on in your body?

These questions were actually answered in studies conducted from 2001 to 2016. Here’s a quick summary.

Nearly 50% of the calories you burn can go toward maintaining your core temperature (about 37°C or 98.6°F). You might have known that, but what you probably don’t know is that obese people tend to have lower core temperatures during waking hours than do non-obese people.[1] 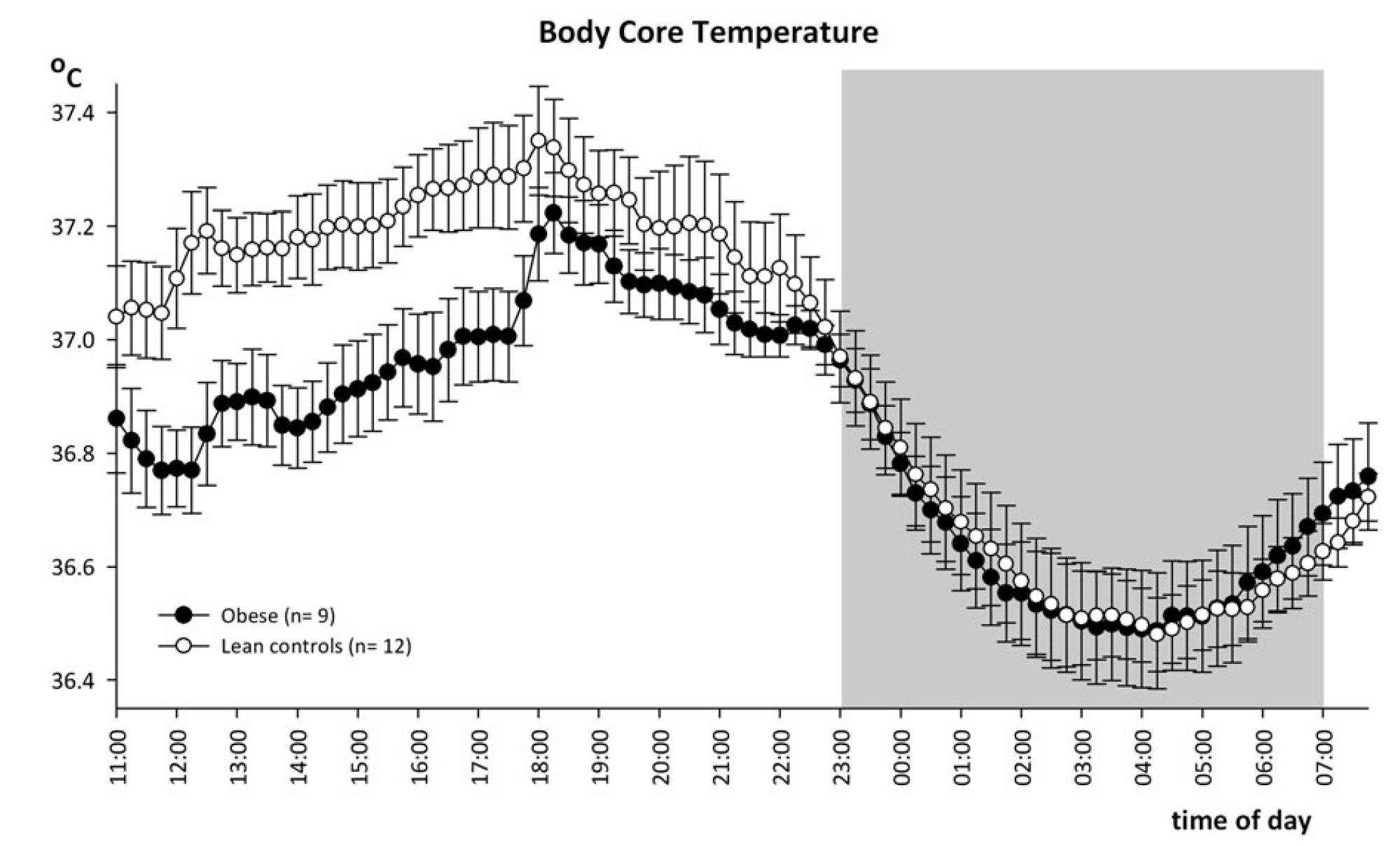 Why is it important? Theoretically, that lower temperature could lead to a weight increase of five pounds per year. It’s never been directly studied, however, so it’s hard to know what the real-life impacts are.

Thermoregulation is totally different in modern life from what it was in centuries past. You seldom depend only on your body to keep you feeling warm, unless you’re on a TV survival show and do jumping jacks in the cold of the night. Rather, you rely on a plentiful supply of clothing, as well as on central heating. Not only are indoor temperatures fairly toasty, but they appear to be increasing a bit each decade.[2] 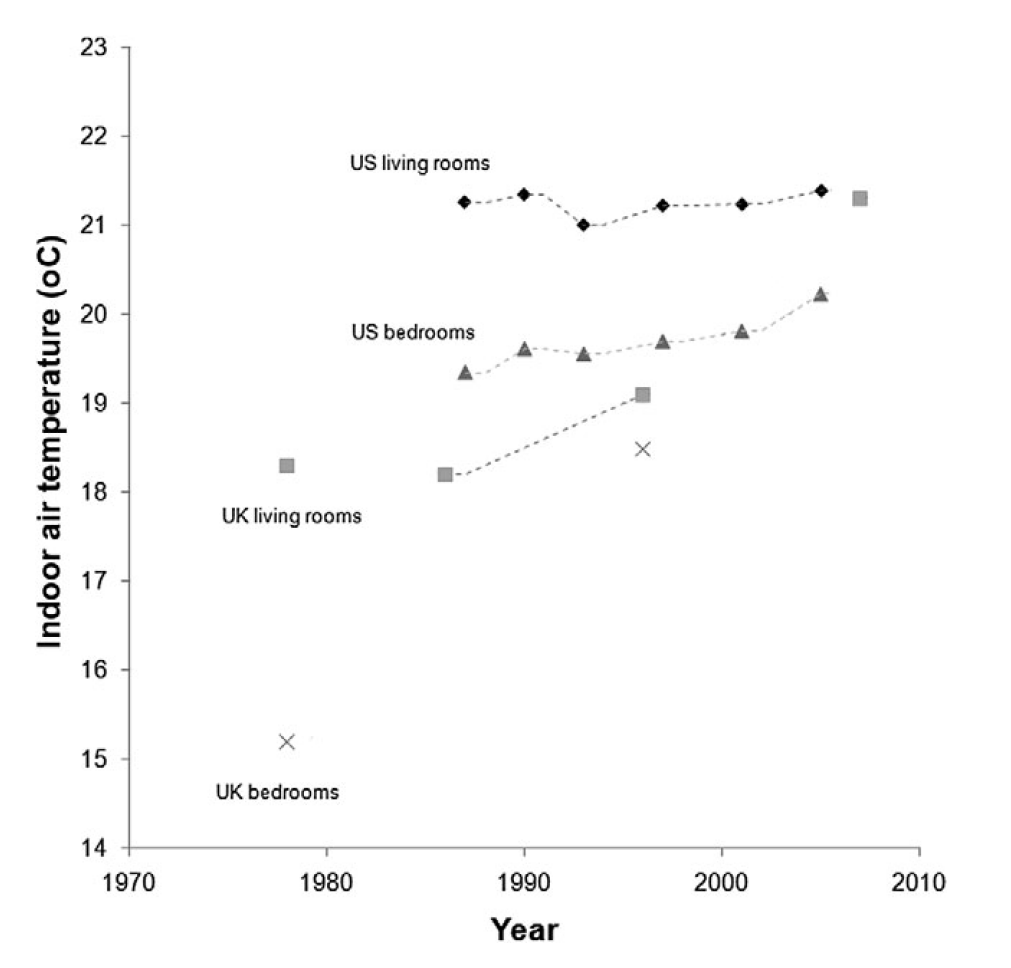 People seem to be more and more willing to crank up the heat in their bedrooms. Which might not be a good thing, since cooler temperatures at night could help the body fall asleep.[3]

A surprisingly large amount of energy goes toward keeping warm-blooded mammals like us … warm. But not always equally warm: a recent study showed that obese people have lower core temperatures during the day, which could theoretically impact bodyweight regulation. Regardless, indoor heating is ubiquitous and indoor temperatures are creeping up each decade.

When it gets too cold, the body creates heat by shivering. This shivering can multiply our heat production fivefold and hence burn a ton of calories. Which is great, except for one thing: shivering totally sucks.

Whereas normal fat (white adipose tissue) is used for energy storage, brown fat is used for heat production. Up until around 2009, researchers didn’t even know that adult humans still had any notable amount of brown fat. They knew that babies had brown fat, to keep their delicate little bodies warm. And rodents have brown fat, so there was a bunch of rodent research. But with the advent of PET scanners, which can highlight highly-metabolically-active tissue (such as tumors, but also brown fat), research really got cooking, and brown fat is now a sought-after therapeutic target for weight loss drugs and supplements.

A quick note on how brown fat works: it has a ton of mitochondria that use something called uncoupling protein (UCP1) to skip the energy (ATP) producing step and direct fuel to producing heat. Most of our brown fat is located around our shoulder blades, around the spinal cord, and a couple other places in the body. It only shows up in PET scans when you’ve been exposed to cold and the brown fat is activated, as shown on the left below.[5] 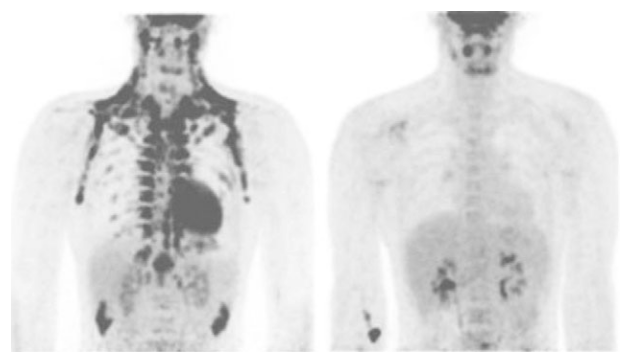 There’s also something called “beige fat” (sometimes called “brite fat”), which is regular white fat that gets converted to a brown-ish type fat which also produces heat. This fat isn’t as prevalent as the brown type, but is being heavily researched.

The first step to cold adaptation is shivering, along with drawing heat away from skin toward the core. With consistent cold exposure, shivering lessens and brown fat can help warm the body.

When it comes to developing brown fat, details are important. Some trials use temperatures as low as 59°F for multiple hours a day, which would be too low for most people in real life. But once you bump the temperature up too much, brown fat is no longer produced in any significant quantity. Researchers estimate that around 65°F is the highest temperature that would accrue benefit, albeit with a longer exposure time needed than temperatures in the lower 60s.

With cold exposure at around 60°F for a week and a half, at six hours a week, brown fat volume increases by 37%.[6] This trial, though, didn’t show an increase in energy expenditure. A shorter trial (three days at 61°F, but with continuous cold exposure) showed an added calorie burn of around 140 kcal per day.[7] It’s possible that switching to normal room temperature (or a warm outdoor climate) for too long may negate benefits of cold exposure, but there aren’t any trials looking at this. The evidence is some mixed, as a previous trial showed an extra 400 kcal/day burned after just two hours of cold exposure. The comparison was a bit wonky though, as it was two hours at 66°F along with putting legs on an ice block intermittently, compared to the same time without ice at 81°F.

Because there’s no standard cold exposure protocol used in every trial, there’s no answer to how much weight you can lose. Researchers estimate somewhere around a 5–10 pound weight loss over a year with cold exposure, although there haven’t been any long-term controlled trials done.

Some people eat more when they get cold. In one trial, office workers at 68°F ate on average 100 more calories than workers at 79°F.[8] Hopefully that trial can be replicated with a colder temperature exposure (like 65°F) compared to room temperature (72°F).

When the temperature gets in the low 60s, eating more food could be quite beneficial for producing body heat in two ways: the thermogenic effect of eating food (in order to process the food as it gets broken down and absorbed), and getting you ready for potentially further cold exposure by building up fat stores.

Animal evidence also suggests that cold exposure might make you particularly susceptible to overeating highly-palatable food (for example, comfort food or junk food).[9] But the balance of evidence seems to suggest that eating more after cold exposure doesn’t totally negate the benefits of increased energy consumption through brown fat.[10]

Brown fat is only net beneficial if cold temperatures don’t cause you to overeat.

Some people feel cold very easily, while others can wear shorts and t-shirt outside in the winter. Everyone should check with their physician before doing any type of cold therapy, especially those who get cold easily (as circulation problems or Raynaud’s Phenomenon may be undiagnosed).

Older people should also be careful, as they can be more likely to experience hypothermia and blood pressure issues. Older people are also less likely to have substantial amounts of brown fat.

That being said, cold exposure around 65°F is not that extreme. And studies have shown that after a few days, subjects find the mild cold exposure less uncomfortable, and shiver less or not at all. Most adults and elderly people appear to find temperatures around 63-65°F acceptable for eight hour periods.[11]

Despite all these studies, it’s impossible to know what the effect on any one person would be. One study showed that energy expenditure after very mild cold exposure (a full day at 68°F rather than 82°F) ranged from a 12% increase down to a 5% decrease.[12]

Spending extended periods in the lower-to-mid 60s (°F) could lead to a weight loss of up to 5-10 pounds a year, by producing brown fat to warm your body up. Controlled trials having only been done over the course of days or weeks though, so long term weight loss is not known for sure.

It’s absolutely essential to not overeat in response to mild cold exposure. At best, it can negate weight loss benefits, and at worse you could gain weight.

Mild cold exposure may be a simple option for weight loss, but cold is also not something to be messed with. Don’t do something stupid (camping in your underwear, fainting in an ice bath, etc) just to lose a little bit of extra fat. Experimenting with a bit lower thermostat setting is a great option.

Turning down the thermostat can also save you money. But if you really hate the cold, don’t feel forced to suffer and give up your comfy room temperature. Cold exposure may have a multitude of potential benefits, but normal room temperatures haven’t been shown to be inherently harmful. Cold exposure is just one potential tool in the health improvement tool chest.