The six decades’ old fast food franchise KFC recently rolled out Original Recipe boneless chicken in its 4,500 US locations.1 The new slogan: “No mess. No fuss. No bones about it.”

The company is so convinced boneless chicken is the way of the future that they’re actually considering eliminating on-the-bone chicken from its menu altogether. According to the featured article:

“McDonald’s execs began experimenting with a range of non-burger options: chicken pot-pies, bone-in fried chicken, deep-fried onion chunks. None of them were successful, until they offered customers deep fried chicken chunks. The McNugget was born. That was 1980, when about 80 percent to 85 percent of chicken consumed in the US was unprocessed… Ten years later, the numbers had almost reversed…

While the rotisserie chicken made a bit of a comeback in the mid-‘90s, the idea of eating the whole bird was, for the most part, a thing of the past… According to internal KFC surveys, nearly four out of five servings of chicken in the US today are off-the-bone, the inverse of 30 years ago.”“_ednref2”>2 even questioned “whether customers understood the risks of eating McDonald’s chicken over regular chicken.” But there’s yet another reason for my questioning the trend of going boneless, and it’s even less savory than that…

Why might this be “a big deal”? Well, for one, processed chicken nuggets, regardless of brand, are far more likely to contain all sorts of additives and fillers you’d be better off without.

In a 2003 lawsuit against McDonald’s, Federal Judge Robert Sweet 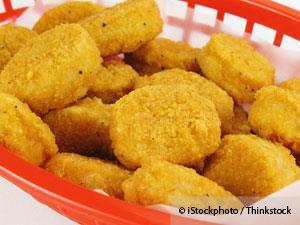 The Future of Food: Bioengineered Meat

Few are talking about this, but scientists have been working on bioengineering “cultured” meat for the past decade. According to a September 2011 Huffington Post article,3 scientists at the University of Maastricht in the Netherlands claimed to be as little as 12 months away from delivering the world’s first bioengineered synthetic hamburger.

As of this writing, the hamburger has yet to be presented, although I doubt that means the plan has been abandoned.

The article also pointed out that London’s Royal Society had released a global food supply report, in which they called for a synthetic meat solution to feed the world’s growing population without causing environmental destruction.“The only barriers? Overcoming the social stigma and the RS scientists say it could take another decade before it rolls out to the masses,” the article states.

Then, in February 2012, The Economist4 followed up on the research. Other Dutch scientists, led by Dr. Mark Post at the Eindhoven University in the Netherlands, expressed hopes of decimating animal husbandry altogether by altering how meat for the masses is produced. The article explains how this laboratory-created meat is created:

“Dr. Post’s cultures, grown from stem cells, are sheets 3cm long, 1.5cm wide and half a millimeter deep. To make the world’s most expensive hamburger 3,000 of them will be needed. The stem cells themselves are extracted from cattle muscle and then multiplied a millionfold before they are put in Petri dishes and allowed to turn into muscle cells.

When they have done so, they are encouraged to exercise and build up their strength by being given their own gym equipment (pieces of Velcro to which they can anchor themselves in order to stretch and relax spontaneously). The fatty cells of adipose tissue, needed for juiciness, are grown separately and then combined with the muscle cells before the whole thing is cooked.

Producing meat in Petri dishes is not commercially viable, but Dr. Post hopes to scale things up—first by growing the cells on small spheres floating in tanks and ultimately by using scaffolds made of biodegradable polymer tubes, which would both add the third dimension needed for a juicy steak and provide a way of delivering nutrients and oxygen to the steak’s interior.”

Sure, companies like KFC may have a point when they say they’re just changing their meals to meet the needs of the “chicken nugget generation.” But a side effect of getting used to the idea that chicken meat doesn’t have bones is that, at any point, the meat used in these processed nuggets could be exchanged for bioengineered meat, and no one would be the wiser…

I sincerely doubt bioengineered meat would be advertised, since it’s hardly a selling point—at least in the beginning. What the potential health ramifications might be from eating such meats are completely unknown, but it’s clearly not going to be identical to meat from an animal.

Seeing how commercially available bioengineered meat is still a ways away from being a reality you have to contend with, let’s bring the focus back to something more relevant to the present day, namely antibiotics in CAFO meats. Animals are often fed antibiotics at low doses for disease prevention and growth promotion. These agricultural uses account for about 80 percent of all antibiotic use in the US,5 so it’s a MAJOR source of human antibiotic consumption. 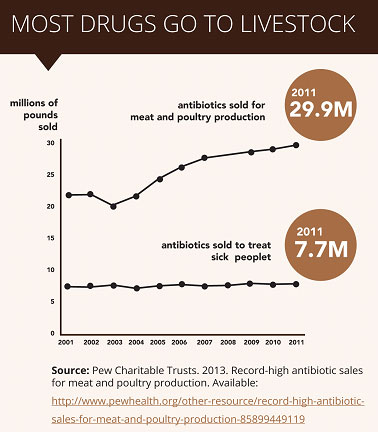 According to a recent NPR report,6 data published by a joint government program7 from tests conducted on supermarket meat samples collected in 2011 by the National Antimicrobial Resistance Monitoring System, reveals the presence of several disease-causing bacteria, including the super-hardy antibiotic-resistant versions of salmonella, Campylobacter and E. coli. According to NPR:8

“The implications were significant — that the bacteria had become resistant to antibiotics back at the farm because farmers were overusing them. The findings, released through the joint program of the Food and Drug Administration, the Department of Agriculture and the Centers for Disease Control and Prevention, got little attention when they were published in February. But this week, the Environmental Working Group, which opposes some of the livestock industry’s use of antibiotics, analyzed the government data and highlighted some of their startling implications in a report.”

The report9 in question, aptly named “Superbugs Invade American Supermarkets,” points out that many of the meats tested contained “startlingly high levels” of antibiotic-resistant bacteria on:

Writing for the New York Times,10 David A. Kessler, former commissioner of the Food and Drug Administration (FDA) from 1990 to 1997, also recently sounded warning bells over the rise of antibiotic-resistant pathogens in livestock, urging the FDA to take the matter seriously. So far, the agency has only restricted on class of antibiotics, cephalosporin, from routine use in livestock.11

“While the FDA can see what kinds of antibiotic-resistant bacteria are coming out of livestock facilities, the agency doesn’t know enough about the antibiotics that are being fed to these animals,” he writes. “This is a major public health problem, because giving healthy livestock these drugs breeds superbugs that can infect people. We need to know more about the use of antibiotics in the production of our meat and poultry. The results could be a matter of life and death.”

The misuse of antibiotics in livestock has now become “a direct source of foodborne illness,” EWG points out. Worse yet, because animals are given these antibiotics continuously, in low doses, pathogens are becoming increasingly resistant to the drugs, which means they no longer work to treat human disease either. The end result is that people are dying from infections that were once easily treatable.

Despite this, organic foods, which are by law produced without such pathogen-promoting methods, are the ones being consistently targeted “for safety reasons.” The truth of the matter is, conventionally grown mass-produced foods pose the greatestdanger to your health, in multiple ways, and are the ones to be avoided if you’re at all concerned about food safety.

“To be safe, consumers should treat all meat as if it may be contaminated, mainly by cooking thoroughly and using safe shopping and kitchen practices (see EWG’s downloadable Tips to Avoiding Superbugs in Meat),”12 EWG suggests.13

One of the best ways to avoid contaminated meat is to avoid meat from animals raised in confined animal feeding operations (CAFOs), aka “factory farms,” and buying organic, pastured or grass-fed meats instead. Growth promoters such as antibiotics are not permitted in organic animal farming, and organically-raised animals are also healthier as a result of being pastured, so overall you’re getting far “cleaner,” healthier meat.

When it comes to chicken, there are a number of designations floating around, such as “organic,” “free-range,” “pastured” and “cage-free.” But while you may think these are interchangeable, they’re actually not. In many ways these labels are little more than creative advertising.

The definitions of “free-range” are such that the commercial egg industry can run industrial farm egg laying facilities and still call them “free-range” eggs, despite the fact that the birds’ foraging conditions are far from what you’d call natural. For example, regulations on the use of the term “free-range” do not specify the amount of time the hens must spend outdoors or the amount of outdoor space each hen must have access to. Nor do they indicate that the hen must have access to a pasture diet.

True free-range hens (and eggs), now increasingly referred to as “pasture-raised,” are from hens that roam freely outdoors on a pasture where they can forage for their natural diet, which includes seeds, green plants, insects, and worms.

Large commercial egg facilities typically house tens of thousands of hens and can even go up to hundreds of thousands of hens. Obviously they cannot allow all of them to forage freely. They can still be called “cage-free” or “free-range” though, if they’re not confined to an individual cage. But these labels say nothing about the conditions they ARE raised in, which are still deplorable. So, while flimsy definitions of “free range” and “cage-free” allow such facilities to sell their products as free range, please beware that a hen that is let outside into a barren lot for mere minutes a day, and is fed a diet of corn, soy, cottonseed meals and synthetic additives is NOT a free-range hen, and simply will not produce the same quality meat and/or eggs as its foraging counterpart.

Certified organic poultry is also the only poultry product that is 100 percent guaranteed to be antibiotic-free.14

So to summarize, what you’re really looking for is chicken and eggs that are both certified organic and true pasture-raised. Barring organic certification, which is cost-prohibitive for many small farmers, you could just make sure the farmer raises his chickens according to organic, free-range standards, allowing his flock to forage freely for their natural diet, and aren’t fed antibiotics, corn and soy. Last year, I visited Joel Salatin at his Polyface farm in Virginia. He’s truly one of the pioneers in sustainable agriculture, and you can take a virtual tour through his pasture-raised chicken farm operation in the following video.

It is very difficult to control the quality of your food if you’re eating in a restaurant, which is why I recommend that you prepare the vast majority of your food yourself. If you’re going to occasionally dine out, you would be best served to avoid fast food places. Reclaiming your kitchen is part and parcel of healthful living, so you know exactly what you’re putting in your body. Whether you are grocery shopping or looking for dining options, the table that follows lists criteria to look for in identifying high-quality, health-promoting foods. If the food meets these criteria, it is most likely a wise choice and would fall under the designation of “real food.”

And if you have children, remember that feeding your children home cooked meals can have far reaching benefits, extending even to your future grandchildren. Yes, that’s right! It is now well known that dietary changes can prompt epigenetic DNA changes that can be passed on to future generations. For instance, pregnant rats fed a fatty junk food diet had daughters and granddaughters with a greater risk of breast cancer. Making wise food decisions can literally “override” genetic predispositions for disease.