A new study from The Bandana Training Journal of Derision and Bro-Science confirming that 107% of Americans will resolve to lose at least 5 lbs this New Years. That, my friends, is a staggering statistic. I’m not a mathematician, obviously, but I’m pretty sure that’s more than all of America. Holy lypolysis Batman.

Nobody is satisfied with their body anymore. Literally. Nobody. Okay, that’s not true. I’m sure there are some people who are completely, whole-heartedly pleased with their reflection in the mirror. I’ve just never met them.

You might think that supermodels, professional athletes, or really sexy people are the outliers. Wrong. Having trained all of them, I can attest that they are no exception, often emphatically disappointed and disillusioned with their appearance. Just look at Scarlet Johansson interview with Barbara Walters 3 weekends ago (I’ll give you a hint: “’It’s an okay body. I wouldn’t say it’s particularly remarkable though. I don’t like my thighs, my mid section,” Scarlett said.) 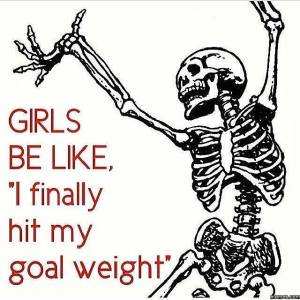 And it’s not just girls. And it’s not just the overweight. We are all, to some degree, convinced that our body is underachieving.Now let’s not confuse the issue here: there’s absolutely nothing wrong with the pursuit of “better”. Better is awesome. It’s well documented that progress is closely related to happiness; our general sense of well-being has a stronger relationship with our trajectory in life than our station. Makes sense, when you think about it: a homeless man sitting on the sidewalk is offered $500 – he is elated. A wall-street trader 50 stories above him losses a few mil – he jumps out of the window. Objectively, the wall-street trader is still in a much better place, sans a few million, than the homeless man with the 500 skrilla, but he’s heading in the wrong direction (namely, towards the sidewalk. Anyone? No? Dark.) Point being, it’s the direction that matters most. We need to make progress. We should make progress. Progress is delightful.

But alas, therein lies the problem. We’re not making progress. Collectively, we’re in a perpetual state of over-weight purgatory. A representative sampling of New Year’s Resolutions from the past 4 years:

We are constantly, neurotically trying to lose weight. I suppose this begs the question: Fuckin’ eh.

Shoot. That’s not a question. The real question: Why are we perpetually disappointed with how we look?

Photoshop started as a PhD thesis in 1990 and hit critical mass when version 3.0 was released for both Mac and Windows and ’94. In celebration of the program’s 20-year anniversary, Adobe released a short documentary: “Startup Memories – The Beginning of Photoshop” (available on YouTube.)

You don’t have to watch the whole thing. The first 2 minutes perfectly summarize the wide spread misapplications of photo tampering. Author Fred Richin warns us of this possibility (mind you, this is from 1990):

“My concern is that if the media takes to doing what Russell is demonstrating now (dramatically false photoshop editing) that people, the public, will begin to disbelieve photographs generally and it won’t be as effective and powerful a document of social communication.”

So optimistic, Fred was. But he isn’t quite prophetic. To paraphrase: “We’ll see through this,” Fred warns. “We won’t trust photos anymore.”

Not what happened. Photoshop has become too convincing, and we, the lovely trustworthy human beings that we are, have become bamboozled. We don’t doubt the photos, at least not when it comes to body image. Sure, the butts are always a little bubblier than ours and the pecs are always a little bit more chiseled, but their authenticity isn’t called into question. The only thing we’re left asking is, “Why don’t I look like that?” Or perhaps, more subliminally, “If I buy those underwear, will I look like that?”

And so it works. Target expands their thigh-gap and their Q3 earnings follow suit. Thus begins a rather scary dance with the consumeristic devil. Photoshop keep sexiness just out of reach, and we, collectively devour the dumfungle out of the product that the consumer-tested exaggeration tells us to buy. We’re constantly sold something we don’t need in order to become something we can’t realize. All the while, the glossy billboard images get more and more unrealistic and our own self-image gets more and more, well, un-photoshopped.

The struggle is real.

Realistic expectations become unrealistic when photos are more influenced by the graphic designer than by the photographer behind the camera or the model in front. The benchmark for beautiful has quite literally become impossible.

Okay. Let’s calm down for a second.

Because if we’re honest, this isn’t a war on photoshop, this isn’t a war on consumerism, and this isn’t a war on glossy magazine ads. Sure, mass media has a collective responsibility to be more honest with their portrayal and we, as consumers, have a collective responsibility to hold them accountable. BUT cultural “ideals” will always be plastered on billboards. That’s not going to change. Even in a non-photoshopped world, we’re never going to look like supermodels. They’re, you know, super. The perfect storm of genetics and training and nutrition and lighting and makeup and spray tanning and 8 weeks of broccoli goes into one Armani ad.

It’s not about the ad.

This battlefront is waged within each and every one of us, individually. At the end of the day, at the end of the commercial, at the end of the magazine, nobody can make us feel inferior about our body without our permission. The best way to change the ecosystem is to change our own psychology. We have the fundamental, inalienable right to look at a photoshopped god-like body and appreciate it while simultaneously cherishing our own body.

We don’t have to look like the manifestation of human perfection to be kind to ourselves.

This isn’t some optimistic mantra or some Fitspo meme. This is serious shit. As individual human beings in the pursuit of a successful life, we have a supreme responsibility to defend our own self-love. Nobody is going to do that for us. In fact, just the opposite. We will be told we’re not beautiful enough. That won’t change until it doesn’t work. The best way to protect all of humanity (read: our kids and our kids’ kids) from this consumer driven inferiority complex is to strip naked, stand in front of a mirror and remind ourself, on a daily basis, that we are beautiful human beings. WE ARE NOT INFERIOR. Whether our body fat is 6% or 26%, our body is a f**king genetic masterpiece.

And still, this really isn’t the whole story now is it? Because weight loss, for many of us, is a necessary, realistic, and worthwhile pursuit.

And we are perfectly capable. I am here to tell you with the utmost certainly that our weight loss goals are attainable. We’ve gotta stop wanting to lose weight and we’ve gotta start losing weight. And this has literally NOTHING to do with abs or fat or sexiness or Armani ads. This is not because the loss of 5 lbs will make many lives dramatically better (it will.) This is not because there is a special flavor of happiness for those who revamp their life and lose 30 lbs (there is.) This is not because the hands of Zeus himself will reach down from Mt. Olympus and stroke your rippling abs like the Demi-God you fashion yourself into (too far.)

If you’ve committed to losing weight, it becomes an issue of grave consequence.

Every time you set a goal, you enter into a contract with yourself. Even the smallest of self-commitments are tallied:

The scoreboard comes to define, in a large way, how we think about ourselves. If we say we’re going to do something and constantly disappoint ourselves, we come to think of ourselves as a loser. “I wanted to, but I didn’t.”

If we say we’re going to do something and we constantly deliver, we come to think of ourselves as a winner. “I wanted to, AND I DID.”

The goal-setting / goal-achieving cycle is at the foundation of successful living. All of our choices make us either more or less confident in the courage of own convictions. This is the virtuous cycle. The story of winning:

Or, if we’re being a little more realistic:

Failure is not an option. Everyone has to succeed.

It almost feels silly in its simplicity. But there is a lot of wisdom in simplicity. It’s a very dangerous enterprise to set a goal we’re not willing to follow through on. If we want to lose 5 lbs, we better do it and we better do it with absolute conviction because, quite frankly, we don’t have the time or the inclination to disappoint ourselves. The success or foundering of our lives depend upon it.

WOULD LOVE TO HEAR WHAT YOU HAVE TO SAY. LET’S CHAT