Millions take non-steroidal anti-inflammatory drugs (NSAIDs) daily for arthritis and related inflammatory conditions, but are completely unaware that far safer, and at least as effective, natural alternatives already exist — and are as easily accessible and inexpensive as the spices found in your kitchen cupboard.

Human research on the health benefits of turmeric is sparse, mainly due to the lack of capital available to fund expensive clinical trials.[i] Despite many decades of investigation as a lead drug compound, and the availability of thousands of preclinical studies indicating turmeric’s therapeutic value, few yet realize that this common kitchen spice may provide a suitable drug alternative for common health conditions.

The latest human study to clinically confirm turmeric’s medicinal value was published in the Indonesian Journal of Internal Medicine in April, 2012 and found the curcuminoid extract of turmeric was able to reduce inflammation in patients suffering from knee osteoarthritis.

The synovial fluid is an egg yolk-like liquid within the cavities of the synovial joints, which serves to reduce friction between articular cartilage during movement.  In knee osteoarthritis, a condition that afflicts 1 in 2 people by the age of 85 years, the immune cells known as monocytes express increased inflammatory COX-2 enzyme activity within the synovial fluid.

In the study, subjects were given either 30 mg 3 times daily of turmeric extract (curcuminoid) or 25 mg 3 times daily of diclofenac sodium for 4 weeks. After the treatment period, aspiration of the joint as performed and the secretion of cycloxygenase-2 enzyme by synovial fluid’s monocytes was evaluated.

Results were reported as follows:

In summary, both curcuminoid and diclofenac sodium were capable of significantly decreasing the secretion of the inflammatory COX-2 enzyme, with nearly identical potency.

This is not the first human study to confirm turmeric is at least as effective as an NSAID drug in reducing the symptoms associated with knee osteoarthritis. A 2010 study published in the Journal of Alternative and Complementary Medicine found 2,000 mg of turmeric extract was as effective as 800 mg of ibuprofen in reducing symptoms of pain and inflammation.[ii]

What is most remarkable about the more recent study is not that turmeric curcuminoids have potent anti-inflammatory properties – there are already hundreds of studies confirming its COX-2 reducing and otherwise anti-inflammary effects — but rather how much safer they are relative to NSAID drugs like diclofenac, which like most pharmaceutical anti-inflammatory drugs have been linked to adverse health effects such as increased cardiac mortality, miscarriage and seizure.

One way to assess the relative toxicity of these two compounds is to compare the primary polyphenol in turmeric, curcumin, with diclofenac sodium through their respective Material Safety Data Sheets, which contain detailed information on the toxicity of these substances.

Diclofenac Sodium: The LD50 for mice is 95 mg/kg, meaning that it only takes 95 mg/kg of mouse to acutely kill 50% of an exposed group.

In order to get perspective on how toxic an LD50 of 95 mg/kg is, let’s first calculate how much of this chemical it would take in milligrams to kill an average sized mouse. Mice are between 15-27 grams, depending on their age, strain and diet. If we take the average between the two, at 21 grams, our mouse would weigh 0.021 kilograms. This means that it only takes 1.9 milligrams to acutely kill 50% of the mice given such a dose.

Extrapolating to humans, an average 150 lb adult weighs 68.03 kilograms, it would only take 6462 milligrams, or 6.46 grams to kill 50% of the humans given the dose. This is less than the weight of three pennies (7.5 grams).  Compare this to the LD50 of curcumin (2,000 mg/kg), where it would take more than 136,000 mgs (4.86 ounces) to kill 50% of the humans given it – and even this estimation is doubtful, since it is likely that it would simply be vomited up, or expelled through the gastrointestinal tract, and other organs of elimination, before reaching lethal levels in the body.  Also, remember that it only took 90 mg a day in the aforementioned study to reduce inflammation as effectively as diclofenac sodium.  The difference between the 90 mg required to produce an effective response, and a (theoretical) 136,000 mg threshold for lethal toxicity, is four orders of magnitude.

In practical terms, the chance of you hurting yourself with a drug like diclofenac sodium — ironically, in an attempt to reduce pain — as compared to a simple kitchen spice like turmeric, is infinitely higher. Consider too, that there are over 100 known adverse health effects associated with this chemical class of drugs, whereas turmeric (and curcumin) has been linked to over 600 beneficial ones — not exactly a hard choice to make, when it comes to risk-benefit analysis. 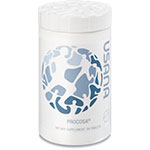 You can mess with your family, your neighbors, and maybe even your boss, but one thing is for sure—you can’t mess with your joints. Active adults and athletes all agree that joint problems can be an unforgiving and formidable foe that can cause you problems throughout your life. However, you’re not helpless—adding glucosamine to your diet may help maintain healthy cartilage and joints. Procosa is not only an excellent source of glucosamine, it’s formulated with vitamin C, manganese, and other important nutrients essential for optimal joint health.* Another advantage of Procosa is that it contains the Meriva bioavailable curcumin complex, enhancing the supplement’s action to provide more noticeable benefits. Vitamin C and Meriva also help neutralize cell-damaging oxidative stress.* Procosa is a great way to start taking care of your joints so you can keep doing the things you love.*

Meriva® is a registered trademark of Indena Sp.A.

Contact me to order this product or go to www.healthyoutlook.usana.com