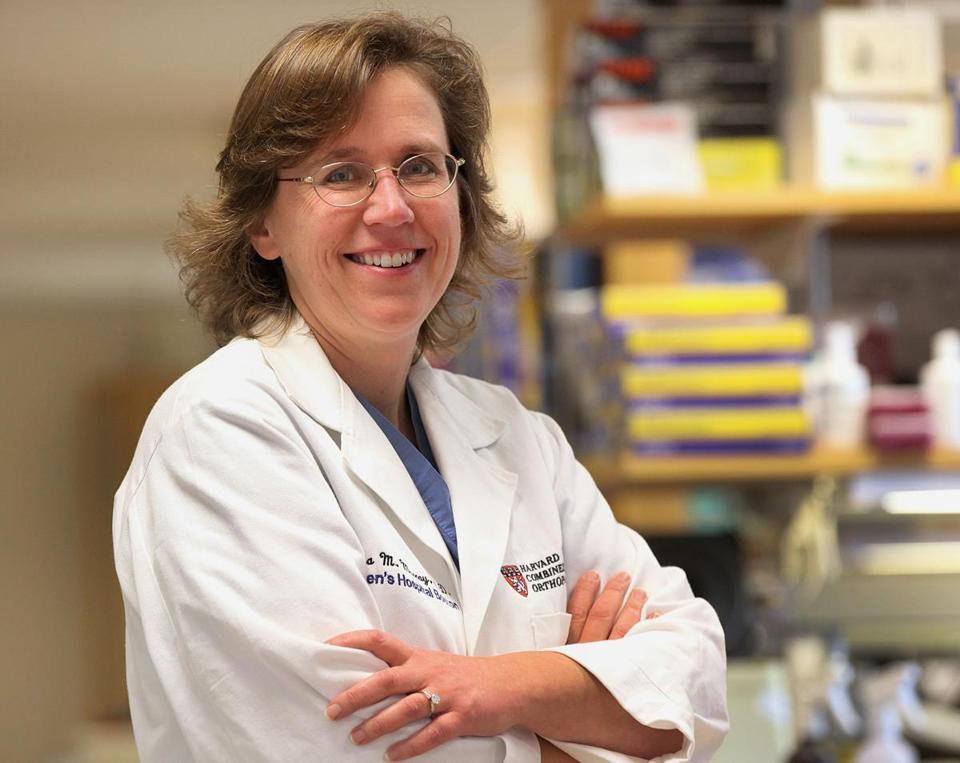 Nearly three decades ago, a man on crutches changed the course of Dr. Martha Murray’s life. The two met at a party at Stanford University, where Murray was a graduate student in engineering. They talked about the man’s recent anterior cruciate ligament, or ACL, tear. When he told Murray his reconstruction surgery would require a tendon graft and holes drilled into his thighbone and shinbone, she was shocked.

Murray wondered why surgeons couldn’t simply sew the two ends of the torn ligament back together and let it heal. The question nagged at her, led her to the university’s medical library for research, and, ultimately, resulted in a switch from engineering to medical school. Ever since, Murray has studied ACL tears and sought ways to help the ligament heal without grafts or holes drilled into bones. The result has been a sponge scaffold now ready for testing in human knees.

If all goes as hoped with human trials, the sponge scaffold could give athletes new, less invasive options for ACL repairs, particularly the young athletes Murray sees at her Boston Children’s Hospital practice where she works in the Division of Sports Medicine. Today, ACL tears are one of the most common knee injuries, especially among basketball and soccer players. Every year, approximately 400,000 people tear their ACLs in the United States. And women have a two to six times higher risk of suffering an ACL injury than males participating in the same sport.

That means a lot of patients could potentially benefit from Murray’s work. She discussed what it took to go from engineering student to designing structures that help ACLs heal themselves and what she hopes the future holds.

Q. What gave you the idea for the scaffold?

A. When the MCL [medial collateral ligament] tears, the two ends bleed and the blood forms a provisional scaffold between the two torn ends that the tissue then grows into and heals itself. . . . In the ACL, the ends bleed when it gets injured, but the blood can’t solidify. It can’t clot between the two ends of the ligament because of the fluid in the knee joint. So, you end up having these two torn ends washing around in this liquid instead of getting reconnected by a solidified blood clot. Once we figured that out, we developed a scaffold, basically like a sponge, that you can use to hold the blood between the two torn ends of the ACL long enough for the cells around and the tissue around to grow into it and reunite. When we do the repair of the ACL and we sew it back together, we sew it with the sponge between the two ends. Then, we can put some of the patient’s own blood onto that sponge. The sponge soaks up that blood and holds the blood which has all the right biology to stimulate healing. The sponge gets replaced over six to eight weeks with healing tissues. It’s there until it’s not needed anymore.

Q. You’ve seen the scaffold work on pigs’ knees which are very similar to human knees. When will human trials start?

A. We just got our approval from the FDA to try this in the first set of 10 patients. It’s called a safety study. It’s not even a phase one. It’s before that where you just try the technique to make sure there are no big red flags that you haven’t thought of or haven’t found in your preclinical testing. We’re hoping to be ready if somebody wants to try this by Jan. 1.

Q. What type of patient do you want for the safety study?

A. We’re looking for patients who are going to be 18 to 35 years old who have recently torn their ACL, within the last week or two. Because, unfortunately, when you tear your ACL, after a while it starts to break down and degrade. So, we want to have a tear that’s relatively new. We’re basically going to be posting flyers and talking to some of our colleagues and saying, “If you have a patient you think might be interested, could you let them know and let us know.” We’ll get in touch with them and explain the risks and benefits.

Q. The obvious big risk is that the scaffold doesn’t work. But what are some of the benefits of your new approach when compared to current ACL reconstruction surgeries?

A. First off, ACL reconstruction, as we do it now, is a pretty good operation. We can get the vast majority of our patients back to their sports. But one of the drawbacks is that, especially in teenagers, there’s a relatively high rate of tearing your graft. Somewhere around 20 percent. The other main drawback is we can’t prevent the arthritis that develops in the knee with an ACL reconstruction. We’d really like to stop that arthritis because a lot of our patients are in the 15- to 20-year-old range. If they get arthritis 15 years later, that means they’re 30 to 35 with kind of a bum knee. And that’s not such a great situation.

In the animal trials, the ones that had the repairs actually didn’t develop arthritis the way the animals that had a reconstruction or no treatment did. So, we’re hopeful that if we can save your own ACL and get that to heal rather than replacing that with something different, then maybe that will be a better long-term solution for the knee.

Q. Could the scaffold become the new standard in ACL surgery?

A. We’re really trying to get people to stop thinking about cutting things out and replacing them with synthetics or metal or something else. And instead to think about how can we work with the body’s own biology to get tissues to heal.

In a lot of orthopedics, if you think about the tissues that don’t heal, like meniscus and cartilage and ligaments, they all live in the joints. So, they all have this problem where they don’t have that early scaffold. We typically tend to trim them or get rid of them because we can’t get them to heal. But if we could find a way to put in a substitute scaffold that contains the right biologic cues to get these tissues to heal and we can save those tissues, that’s a different way to think about approaching the problem. Our relatively simple solution of a sponge and putting the blood there where it belongs may not be the final solution. If we can just get some really smart scientists to think this could work, then maybe they’ll design an even better scaffold or figure out an even better growth factor to put in there.

A. What we’ve done is gotten advice from multiple physical therapists who have a lot of experience with ACL rehabilitation. We’ve told them about the project and they’ve helped us design a rehabilitation protocol that’s very similar to what you would do after an ACL graft. We’re going to try to progress through things in the protocol that are easy on the ACL up to things that are hard. We’re going to start basically with an ACL reconstruction rehabilitation protocol. Then, we’re going to see how that works. Is that too aggressive? Is that not aggressive enough? What do we need to do to modify it from there?

Q. So, you’re looking at the familiar six- to eight-month rehabilitation process before athletes can return to action. Will you have any earlier indicators that the sponge scaffold is or isn’t working in humans?

A. At three months, we’re planning to do an MRI of their knee. We’ve developed a technique using MRI that can help us predict how strong the repair is. So, we’ll be able to tell people early on that, “Yes, this looks like it’s working for you” or “No, we don’t think it’s working.” If it’s not working, they can start thinking about maybe having an ACL reconstruction if they’re anxious to get back to sports. We’re going to try to give the patient as much information early on as we can.